Skip to content
People who don’t know anything about palm oil really shouldn’t be writing “gotcha” articles about palm oil. The latest in that genre – from none other than CNN – is replete with errors of fact, data, and assumption. It’s more akin to “Fake News” than a “Reliable Source” – as one of their own programmes is titled.

As we have written before, there are plenty of unsolved issues around haze that need to be addressed. That same challenge goes for Russia, Brazil, Australia and the U.S. who each faced substantial fires this year. CNN, though, does not attempt to enter a mature debate about any of that: they settle instead for a thoughtless broadside against the entire palm oil industry.

The problems with CNN’s report are myriad. In this special edition we’ll look at some basic facts that CNN has glossed over. Then we’ll look at the timing and the narrative of the CNN report – which is important, because there is a wider context that may explain why CNN all of a sudden became interested in palm oil, and then dispensed with nuance and simply went with scaremongering.

The fires in a regional context

Why is this significant?

The CNN report – and the quotes from European Union-funded environmentalist groups – have attempted to link the fires to increases in palm oil production. This is simply not the case.

The fires in a global context

According to Global Forest Watch and NASA data, Malaysia and Indonesia have recorded a total of 92,559 hotspots to date this year.

Here are comparative figures for other countries.

In other words, Russian and Brazilian fires this year have had 400% greater frequency than those in Indonesia and Malaysia. CNN does not mention this: nor has it attempted to paint entire industries in Russia, Australia or Brazil as blameworthy for their countries’ fires.

The fires in a palm oil context

Haze and emissions in a global context

Although emissions data from fires is often simply an estimate, CNN refers to the fires – supposedly related to palm oil – as a ‘climate bomb’. 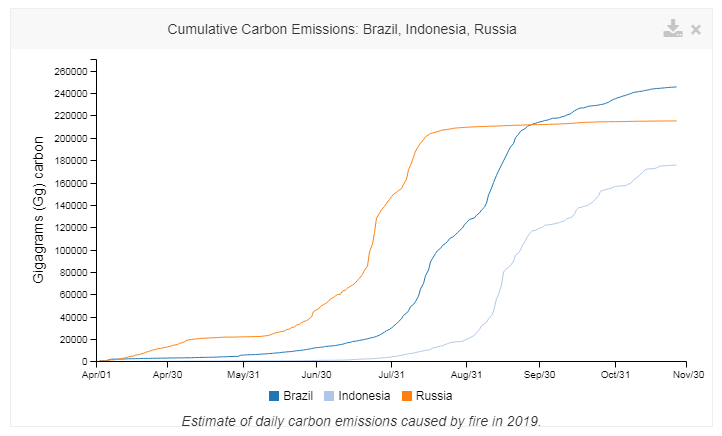 Despite this, CNN inaccurately portrays palm oil consumption among Western consumers as the key determinant in global fires and global emissions.

Palm oil in a global context

It’s also worth remembering the palm oil has a significantly lower deforestation footprint than many other commodities. This is something that NGOs such as WWF point out: Beef production is the top driver of deforestation in the world’s tropical forests.”

As EU-commissioned research has pointed out, 24% of deforestation is caused by livestock, followed by soybean (19%), maize (11%), oil palm (8% %), rice (6%) and sugarcane (5%). So, again, the idea promoted by CNN that Western consumers’ choice of palm oil is somehow the determining factor in deforestation is not supported at all by the data.

“If hunting does not stop, all populations that are hunted will decline, irrespective of what happens to their habitat. These findings confirm that habitat protection alone will not ensure the survival of orangutans in Indonesian Borneo, and that effective reduction of orangutan killings is urgently needed.”

CNN extensively quotes NGOs that argue palm oil certification schemes such as the national schemes in Indonesia and Malaysia, and RSPO, have no credibility.

Rather than including quotes unquestioningly from organisations with a clear (and well-known) political bias, CNN should have undertaken some basic homework. Of the total fire alerts in Indonesia this year, less than 0.5 per cent were on RSPO concessions. This underlines how off-base the CNN claims are. These data could have been found by CNN with the most cursory of pre-publication research.

Further, the majority of the world’s certified sustainable palm oil goes to the Western companies that CNN targets.

These companies and their suppliers have already made extensive, legally binding commitments to zero deforestation.

So, what’s the objective of the CNN story, then? The data is cherry-picked; the target is misidentified; and some really basic errors have been included. This is more Fake News than Reliable Source.

Unfortunately, CNN and many other media organisations are continually duped by Western environmentalists’ claims about palm oil and Southeast Asia.

As we’ve pointed out before, there are many reasons that environmentalists – particularly the EU-backed Transport and Environment and Greenpeace – are supporting an anti-palm oil narrative rather than addressing much greater climate and biodiversity threats in Brazil and elsewhere.

First, European rapeseed and sunflower seed farmers have watched their market share become completely decimated by palm oil imports. Palm oil is cheaper, has lower environmental impacts, and has more applications across food, oleochemicals and biofuels. Put simply: the European farmers produce an inferior product. Attacking palm oil is a political choice for many in Europe – and NGOs paid by EU taxpayers are often at the forefront.

Second, U.S. soybean has been accepted as a feedstock under the EU’s Renewable Energy Directive (RED). Palm oil has not. There are vested interests in Europe that are seeking to justify this political choice – made to curry favour with U.S. President Donald Trump –despite soybean having a larger deforestation, and wildfire emissions, footprint than palm oil.

Third, the timing of this activity is far from an accident.

The UNFCCC (UN Framework Convention on Climate Change) meeting – COP25 – started this week in Madrid. There will be a large number of climate officials and NGOs vying for the attention of the world’s media – including Greenpeace and CNN.

The European Commission’s new commissioners have taken office this week. On the agenda at once will be: the EU’s position on climate change, including a European Parliamentary resolution to specifically single out palm oil in the UNFCCC agreement; the future of the RED as it goes into its review phase; an action plan on the future of forests; a review of palm oil certification schemes; and trade negotiations between the EU and Indonesia, which are also taking place this week in Brussels.

All of these events this week point to a CNN-Greenpeace arrangement  coordinated in advance to push anti-palm oil action higher up the EU’s agenda.

CNN – like many news organisations catering to Western audiences – has been sucked into a narrative of guilt around palm oil. Worse, CNN has clearly taken an editorial decision that the only voices it wants to speak to – or hear from – on palm oil are so-called environmentalists. No palm oil company representatives, or researchers, or field agronomists, or government officials, appear in the CNN-Greenpeace article. This cannot by any stretch of the imagination be called balanced or objective reporting.

Perhaps it’s easier for CNN and NGOs to badger consumers with a narrative about palm oil and snack foods, than to ask them give up steak and that French Bordeaux.

Next time the CNN producers think about copying & pasting Greenpeace’s lines into a news ‘exposé’, they may consider including the following, internationally-recognised, facts:

There are some serious and important debates to be had about the balance between economic development and environmental conservation – both globally and in specific regions. There are real challenges about integrating small farmers, and local producers, into regional or global supply chains, and into certification schemes.

It is to the great detriment of quality public discourse around palm oil, commodities, and environmental policy, that CNN-Greenpeace has chosen to ignore the serious and important debates that can be had, and problems that must be solved. Instead, we have another lazy, cherry-picked story from CNN that does nothing to help small farmers, or Western consumers. Some homespun wisdom might be in order: if you have nothing useful to say, it’s better to just say nothing at all.